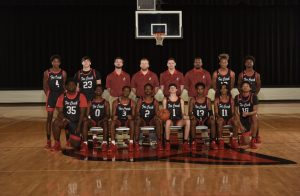 The Varsity Boys Basketball team picked up a huge win on the road at Strom Thurmond on Wednesday night by a final score of 59-55. The team was short-handed with Chandler O’Bannon (Power Forward) out with flu-like symptoms and Dalton Langley (Center) sidelined with a concussion. The Preds dressed 9 players and all 9 got into the scoring column. It took a complete team effort after the Rebels took a 41-36 lead at the end of the 3rd quarter…however, FC outscored ST 23-14 in the final quarter to preserve the 4 point victory. Sophomore PG Jadon Johnson scored 15 points, 4 rebounds, 2 assists, and took 2 game-changing charges for the Predators. Senior SG Deavion Scales scored 15 points, 3 assists, 2 steals and the Rebels had a tough time containing him on drives to the basket. Tyler Stampley and Trey Butler hit a couple 3PT late in the 4th quarter that proved to be pivotal in the victory. Justin Freeman scored 6 points, 6 rebounds, and 2 blocks (including a half court shot at the buzzer before halftime to give the Preds some momentum going into the second half). Jacoby Johnson scored 7 points and 4 rebounds. She’Keim Young (4 pts), Jordan Carroll (2 pts), and Nick Williams (2 pts) rounded out the scoring for Fox Creek.

It was the 1st ever victory in school history over Strom Thurmond HS for the Varsity Boys Basketball team! The Preds will look to build on the win with a game @ Augusta Prep on Friday night and then competing in the Evans HS Monterrey Christmas Classic on December 26, 27, and 28.

No Events This Week

Events are added by athletic staff.
View All Events