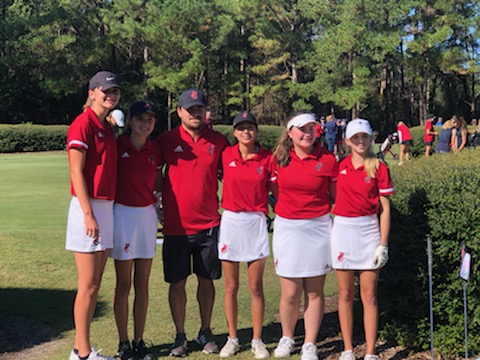 After a long awaited date with the State Qualifier, the day had finally arrived. The story that would unfold over the next 18-holes would be one with two different endings. As a team, the Predators couldn’t quite overcome the challenges presented by the tight and hazard filled Diamondback Golf Club. Needing a 400 or better to qualify, the Predators came up just short with a heartbreaking 418. The State Qualifier ends the most successful season in team history. This season saw all Predators make appearances in 18-hole events, personal best scores for all 8 ladies on the roster, and a first par or birdie in a high school event for those that had not participated.

Heath’s round was one of pure drama and pressure throughout. After stumbling out of the gate with a front-9,51, Heath’s back was against the wall. Needing to shoot a 44 or better on the back to hit the mark for individual qualifications, Heath showed some poise and determination down the stretch. With four holes left, Heath could only afford one more bogey on the scorecard. On 15, Heath would drain an 8 footer for par. At the par-5 16th, Heath would give up the only bogey she had room for after a tough green led to a three-put. This forced Caroline to go par-par on the remaining two holes. After a routine par on the 17th, Heath’s tee shot on 18 found the right rough followed by a wedge that would sit 30 feet away, just off the fringe of the green. Heath played a beautiful chip to 4 feet before holing out for par to get the State Championship appearance that has eluded her the past two seasons.

Maycie Rice will cap off her senior year with her second straight appearance at the State Championships. Her final 36 holes as a Predator come after shooting a qualifying round of 93. Rice is one of 4 remaining members of the inaugural Girls Golf Team after playing with the varsity boys as a freshman.

Also playing yesterday were Ansley James, Gracey Chafin, and Hallie Harper. James’ individual bid ended up just short with a 102. James has arguably been one of the most important members of the Predators team this year as she has rounded into a solid all around player since last year. Her season saw a personal best and an individual record best for the program with an 18-hole score of 85 last week at the Ponderosa Invitational.

While falling short of team qualification, the best is yet to come for this young bunch. Of the eight players on the roster, seven of them will all be back next year and will be led by the long ball hitters in Ansley James and Caroline Heath. Many of the girls will continue to play year-round golf and/or spring and summer tournament circuits to prepare for next year. Good luck to Maycie and Caroline next week at the SCHSL State Championships! Go Lady Preds!